The Major Midget Rep team competed in a 5 team tournament in Smiths Falls over the Christmas break, on December 28th and 29th 2013.

Playing a 4 game Round Robin against Perth/Lanark, South Grenville, Cobden-Beachburg-WestMeath, and the host Smiths Falls, the Selects finished with a respectable 1-2-1 record.  That record was enough for them to finish 2nd overall in the tight Round Robin standings,  and propel them to the Championship game.

In the Championship game, the Selects faced a determined Perth team – who the had beaten the Selects in their 4 previous matches.  The closest match of those previous four was the Selects only loss, 3-0, in the tournament Round Robin.  Getting up 2-0 early proved crucial, as Perth made it 2-1 in the second period.  The Selects didn’t break though, scoring a 3rd goal late in the 2nd to go up 3-1, a lead they wouldn’t relinquish.  Final score was 3-2. 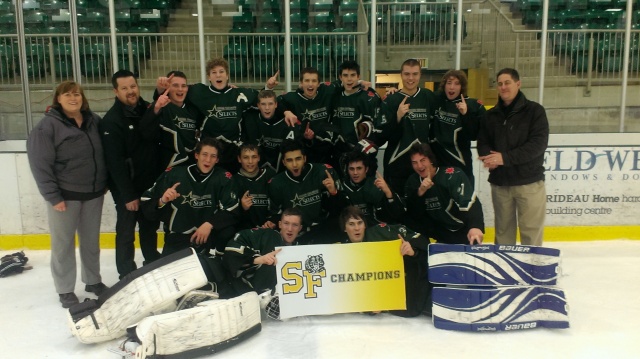