Opening game at 9:00 am saw the Selects take on the Rival Alexandria Glens. The Glens came out strong and opened the scoring with 5:17 remaining in the first. The Selects then stepped up their play and 22 Seconds later it was tied up with a great goal by Kirkland Laperriere with a feed from Captain Trewan Jodoin. With the Momentum shifted in the Game the Selects chipped away scoring 2 more in the second and 2 more in the 3rd to skate away with the 5-1 victory. Goal Scoring was Kirkland Laperriere 2g, Thomas Harrison 2g,Trewan Jodoin 1g,1a. and Ayeisha Khan 1a. MVP for the game Kirkland Laperriere.

With the Selects now in the “A” Pool, game 2 was do or die vs the West End killers. The Selects did not disappoint. Call up Affiliate Player Nathan Feddema opened the scoring at 5:13 of the first period undressing the defenseman, and putting the puck by the Killers Goalie. West end came back 25 seconds later with a shot from the corner to tie the game. The game remained tied till the end of regulation with goaltender James Whitworth earning his keep as the other team was pouring it on. The Selects weathered the storm. The Only Shoot out of the day Selects Coach Brad Maloney chose his 3 shooters after watching them in practice.

Zachery Maloney was second for the Selects went down on the Killers goalie while other team was heckling him, couple toe drags and he deposited the puck behind the Killers Goalie. The second killers’ player also scored sending us to 3rd shooter.

Nathan Feddema (affiliate) was given the nod for having the hot hand during the game and he didn’t disappoint deaking the goalie and scoring. It now was all on James Whitworth to stop # 3 who happened to be the other teams’ best player all game. James did not disappoint and slid across to make the huge save. The hometown crowd erupted and the players jumped over the benches to celebrate. Zachery Maloney was Selected MVP for the game.

A Finals were against South Grenville 2

South Stormont opened the scoring with 8:31 remaining in the second period by Kirkland laperriere on a feed from Zachary Adams

Then South Grenville Scored 3 unanswered goals to finish the second period while the Selects were in penalty trouble.

All in all it was a great day for the team, and they completed the day by finishing off the Community Food Drive. 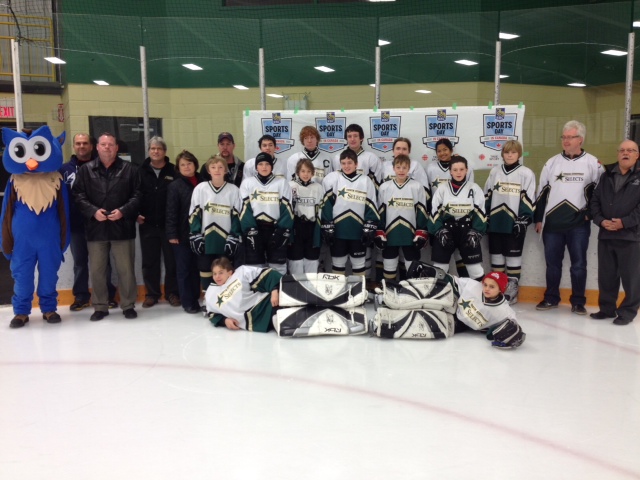